ACES has inducted leaders from universities and broader society, who have made significant contributions to advancing university-community collaboration. Read their stories...

The Academy of Community Engagement Scholarship (ACES) is pleased to announce the names of thirty-eight exceptional scholars and leaders who have been elected to membership in the Academy in 2019 and 2021. Each of the new members has amassed a stellar array of accomplishments related to the production and advancement of scholarship that serves the public good. More specifically, such scholarship is characterized by mutually beneficial collaboration between institutions of higher education and communities of place, practice, interest, action, or circumstance that results in the co-creation of new knowledge. 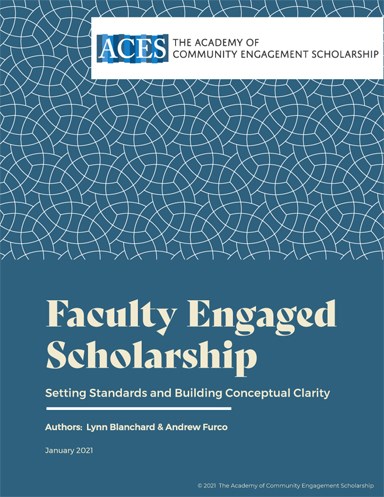 The Academy's membership has formally adopted a series of bylaws revisions meant to increase opportunities for member engagement through a number of new committees and committe structure. In 2020 an ad hoc Organization Committee was formed and charged by the Board of Directors with examining how ACES could better involve its growing membership in an evolving range of ambitious initiatives. The committee first conducted an asset mapping survey to better understand the experience and skills of members. It then reviewed existing and prospective Academy projects and considered ways the structure of the organization could be adapted to unlock the strengths of members to meet the needs of such activities. What emerged was a plan for a new and more dynamic system of standing committees, and proposed changes to the ACES bylaws to enable it.

On December 15, 2020, members were sent an explanation of the plan, the proposed bylaws changes, and ballots. Voting concluded on April 15, 2021 with over two-thirds of the mebership having voted to adopt the proposed revisions. Announcements about the the formation of committees are forthcoming.

Save the Date: ACES 2020 Members' Meeting

May 27, 2019 The Academy convened its annual Members’ Meeting in East Lansing, Michigan on March 10-11, 2019. The conversations were robust and…